"Life...was simpler, once. Once, long ago when I was an untried, untested youth with no more to lose or gain than any other Sentient in the galaxy. Now... I am more. Now, I have tasted the soup of the universe and nothing will ever be the same again. Now, I am Anzat."

Curiosity killed the cat -- but not the Anzat. More than anything else, Jeth Ronin is a curious (and adaptable) man. He has been everywhere -- the Old Republic, the Galactic Empire, the Jedi Order, the military, his own people and the ‘independents’ who thrive in the cracks between the galactic superpowers. Each of these groups has left a mark upon his personality.

Ronin is a resourceful, pragmatic, and practical man -- a lover of the arts and a keen, calculating thinker. He is Force-Sensitive -- which is just one more resource, to him.

(these will be added as they develop in-game)

(these will be added as they develop in-game)

Jeth Ronin can involved in all sorts of activities all over the galaxy; he travels any way that he can from world to world, and everyone needs a good medic from time to time. He also has Force-related interests, Light or Dark, so... there are lots of opportunities for all sorts of RP.

"Alas poor Yorik. He was delicious."

"Care for some soup?" 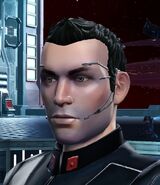 Jeth Ronin of the Imperial Institute of Medicine.

Ready for action.
Community content is available under CC-BY-SA unless otherwise noted.
Advertisement